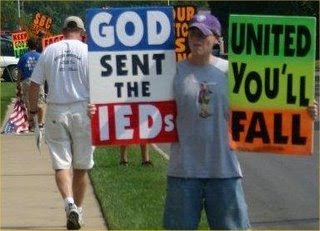 This Fits– Two notorious anti-American groups joined up in Missouri to sue for the right to hold disgusting protests at the funerals of US soldiers who died in combat.
St. Louis Today reported:

The American Civil Liberties Union sued Maplewood today on behalf of a controversial Kansas-based church that protests at the funerals of soldiers, alleging that the city’s funeral protest ban is unconstitutional.

The suit, filed in U.S. District Court in St. Louis, is a first in eastern Missouri but part of a broader effort by the ACLU to go after state and local laws that have been passed in recent years targeting funeral protests, said Tony Rothert, legal director of the ACLU of Eastern Missouri.

Missouri and Illinois are among the more than two dozen states and the federal government that have passed similar laws. Many, if not all, were prompted by the activities of the Westboro Baptist Church and founder Fred Phelps, who believe that America is being punished by the deaths of soldiers and others for its “tolerance” of homosexuality. Church members began protesting at the funerals of gays but then started protesting at soldiers’ funerals and carrying signs such as “Thank God For Dead Soldiers.”

The church has already won an initial victory against a Missouri law that banned funeral protests.

Phelps-Roper sued in federal court in 2006 to block enforcement of Missouri’s law, passed earlier that year. Their bid for a temporary ban on enforcement of the law was initially turned down by a lower court judge, but the 8th U.S. Court of Appeals in St. Louis reversed that decision and the U.S. Supreme Court on June 29 declined to hear Missouri’s appeal. 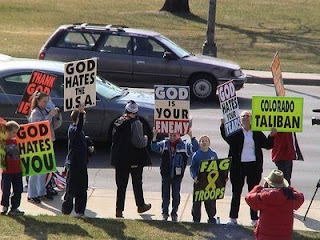 The Westboro group in action.