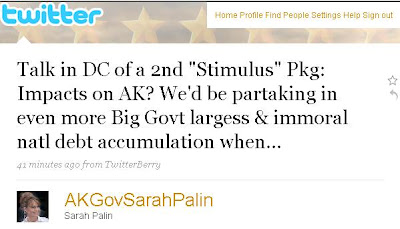 President Obama is growing government outrageously, and it’s immoral and it’s uneconomic, his plan that he tries to sell America. His plan to “put America on the right track” economically, incurring the debt that our nation is incurring, trillions of dollars that we’re passing on to our kids, expecting them to pay off for us, is immoral and doesn’t even make economic sense. So his growth of government agenda needs to be ratcheted back, and it’s going to take good people who have the guts to stand up to him, stand up to him and debate policy, not personalities, not partisan politics, but policy to effect the change that we need there.

No wonder they HATE her.

UPDATE: Ace of Spades has the quote of the day:

“I sure hope [Sarah Palin’s] family recovers from what she has done to them.