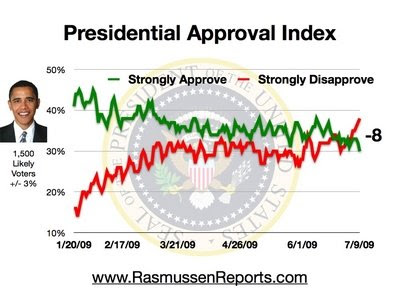 Dear Leader’s approval numbers continue to tank.
His approval index number has now dropped 38 points in less than 200 days in office.
And, that’s with 1,000% support from the state-run media!
Rasmussen reported:

Thirty-nine percent (39%) now give the President good or excellent marks for handling the economy while 43% say he is doing a poor job.

39% say Obama is doing an excellent job on the economy?
…That is pure insanity.
What sort of economic depression would we have to be experiencing before these loons come off their Kool-Aid high?