Ooohh… No, please… Not Joe Biden. 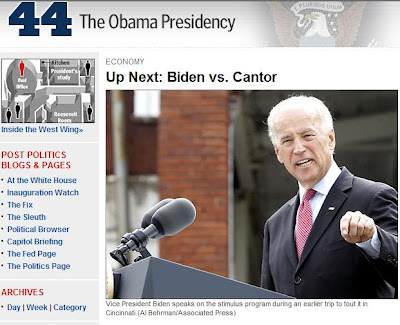 Without naming Cantor directly, the rhetorical assault is aimed squarely at the Richmond lawmaker, who has helped lead the Republican Party to its most effective message since Obama became president: that Obama’s stimulus bill has not produced jobs.

“I say, ‘Don’t let your opposition to the Recovery Act blind you to its results. Come see what I see everywhere I go: workers rehired, factories reopened, cops on the street, teachers in the classroom, progress toward getting our economy back on the move.'”

…Biden, for his part, is expected to take direct aim at that contention. “I ask those critics…. Would they not help the states prevent lay off thousands of teachers, firefighters, cops?” Biden will say in the remarks. “Would they not give a tax cut to 95 percent of the American people? Would they sit back and do nothing as our economy collapsed?”

Biden’s speech is part of a newly aggressive White House effort to counter Republican criticism of the stimulus, which has mounted as unemployment has continued to rise.

But, sadly only 140 people showed up at the Biden rally in Virginia.
The The Richmond Times-Dispatch reported:

“I’m absolutely, positively confident we are on the right track,” he said of the $787 million package.

Biden addressed a crowd of about 140 community college students and invited guests.
.