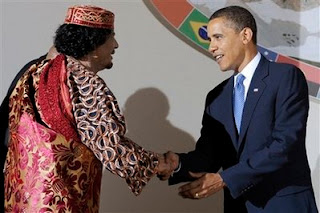 We’re beginning to see a definite pattern of behavior here…
Barack Obama continued to batter US allies and uplift foes on his latest world tour.
The president had no problem criticizing the fledgling democracy in Ghana for things he would never dare say to an Arab regime.
Anne Bayefsky reported at Forbes, via Gabriel Malor:

Speaking in Ghana on Saturday President Obama lectured Africans on local repression, corruption, brutality, good governance and accountability. The startling contrast to his June speech in Cairo was revealing. Stroking Muslim and Arab nations has become the hallmark of Obama’s foreign policy.

In Egypt, he chose not to utter the words “terrorism” or “genocide.” In Egypt, there was nothing “brutal” he could conjure up, no “corruption” and no “repression”.

In Ghana, with a 70% Christian population, he mentioned “good governance” seven times and added direct calls upon his audience to “make change from the bottom up.” He praised “people taking control of their destiny” and pressed “young people” to “hold your leaders accountable.”

He made no such calls for action by the people of Arab states–despite the fact that not a single Arab country is “free,” according to the latest Freedom House global survey.

Speaking to a group of students, our president explained it this way: “The American and Soviet armies were still massed in Europe, trained and ready to fight. The ideological trenches of the last century were roughly in place. Competition in everything from astrophysics to athletics was treated as a zero-sum game. If one person won, then the other person had to lose. And then within a few short years, the world as it was ceased to be. Make no mistake: This change did not come from any one nation. The Cold War reached a conclusion because of the actions of many nations over many years, and because the people of Russia and Eastern Europe stood up and decided that its end would be peaceful.”

The truth, of course, is that the Soviets ran a brutal, authoritarian regime. The KGB killed their opponents or dragged them off to the Gulag. There was no free press, no freedom of speech, no freedom of worship, no freedom of any kind. The basis of the Cold War was not “competition in astrophysics and athletics.” It was a global battle between tyranny and freedom. The Soviet “sphere of influence” was delineated by walls and barbed wire and tanks and secret police to prevent people from escaping. America was an unmatched force for good in the world during the Cold War. The Soviets were not. The Cold War ended not because the Soviets decided it should but because they were no match for the forces of freedom and the commitment of free nations to defend liberty and defeat Communism.

It is irresponsible for an American president to go to Moscow and tell a room full of young Russians less than the truth about how the Cold War ended. One wonders whether this was just an attempt to push “reset” — or maybe to curry favor. Perhaps, most concerning of all, Mr. Obama believes what he said.

Is there any loony Far Left talking point this student of history does not embrace?

Of course, the president spoke out in support of the Leftist Honduran thug Zelaya while he was in Europe, too.
We can’t forget that.