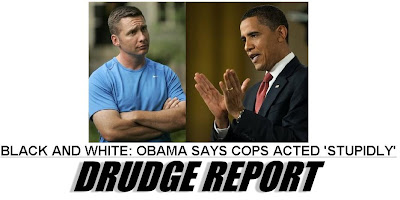 Dear Leader attacked a Boston police officer last night during his nationally televised press conference without knowing the facts of the case.

This same Boston cop gave a dying Reggie Lewis mouth-to-mouth resuscitation in a desperate bid to save the Celtic superstar’s life 16 years ago.

And, this cop who arrested black scholar Henry Louis Gates Jr. says he won’t apologize for his treatment of the Harvard scholar.

A white police sergeant accused of racism after he arrested renowned black scholar Henry Louis Gates Jr. at his home insisted Wednesday he won’t apologize for his treatment of the Harvard professor.

Gates has demanded an apology from Sgt. James Crowley, who had responded to the home near Harvard University to investigate a report of a burglary and demanded the scholar show him identification. Police say the 58-year-old at first refused and then accused the officer of racism.

Gates said Crowley walked into his home without his permission and only arrested him as the professor followed him to the porch, repeatedly demanding the sergeant’s name and badge number because he was unhappy over his treatment.

President Barack Obama said Wednesday he didn’t know what role race played in the incident but added that police in suburban Boston “acted stupidly” in arresting Gates even after he offered proof that he was in his own home.

Crowley said Wednesday he’s disappointed by the heated national debate triggered by the incident and insisted he followed proper procedures in arresting Gates last week in Cambridge on a charge of disorderly conduct. The charge was dropped Tuesday.

Officers were responding to the home Gates rents from Harvard after a woman reported seeing “two black males with backpacks” trying to force open the front door, according to a police report. Gates, who had returned from a trip overseas with a driver, said he had to shove the door open because it was jammed. He was inside, calling the company that manages the property, when police arrived.

Gates was accused of “tumultuous” behavior toward the officers.

Jules Crittenden adds: “I’m not sure that the president making off-the-cuff judgments about complex and inflammatory racial situations he admits he isn’t up to speed on, and weighing in on the side of a personal friend, is particularly helpful.”

More… Here are two images from the actual police report:

Still More… The Boston Globe scrubbed the incriminating police report from its website after it was posted.

UPDATE: Digital Journal has more on what Obama omitted about Dr. Gates’ arrest.

UPDATE 2: Sgt. James Crowley wants President Obama, who is the educator’s friend, to butt out of the incident.

Jim Hoft
Jim Hoft is the founder and editor of The Gateway Pundit, one of the top conservative news outlets in America. Jim was awarded the Reed Irvine Accuracy in Media Award in 2013 and is the proud recipient of the Breitbart Award for Excellence in Online Journalism from the Americans for Prosperity Foundation in May 2016.
BREAKING: Mitt Romney Speaks Out - Says He's in Favor of Senate Vote on Supreme Court Vacancy (VIDEO)
US Marshals Recover 35 Missing Northeast Ohio Children Ages 13 to 18
Unhinged Quebec Woman Pascale Ferrier Identified as Suspect in Case of Ricin Letter Sent to Trump White House
GOOD! DOJ REFUSES to Send Top Civil Rights Official and Heads of Border Patrol and US Marshals to Testify Before Nadler's Committee after Bill Barr Debacle
Senator Lindsey Graham: "We've Got the Votes to Confirm the Justice on the Floor of the Senate BEFORE the Election" (VIDEO)
See more...