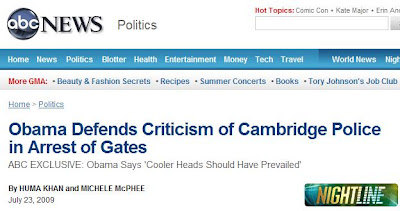 Dear Leader continued to attack the Boston police even though he admitted he did not know the facts to the case in question… And, even though the case is still under investigation.
ABC News reported:

President Obama today stood by his comments that the Cambridge, Mass., police department acted “stupidly” in its arrest of Henry Louis Gates, telling ABC News that the Harvard University professor should not have been arrested.

“I have to say I am surprised by the controversy surrounding my statement, because I think it was a pretty straightforward commentary that you probably don’t need to handcuff a guy, a middle-aged man who uses a cane, who’s in his own home,” Obama said.

In an exclusive interview with ABC’s Terry Moran to air on “Nightline” tonight, Obama said it doesn’t make sense to him that the situation escalated to the point that Gates was arrested.

The cop who arrested Professor Gates is an expert on racial profiling.