Remember: There is no killer regime too violent or undemocratic that the Obama Administration will not reward.

In 2007 thousands of democracy activists in Burma (or Myanmar) rose up and protested against the brutal junta in control their country. 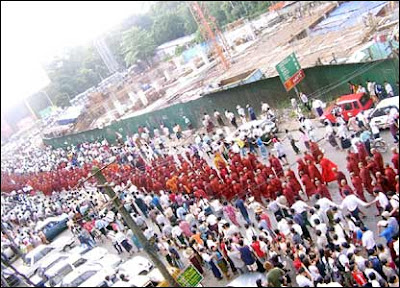 Thousands of Buddhist monks marched in the Hledan area of Rangoon back in September 2007. The monks led massive democracy protests against the violent junta. Unfortunately, the military regime cracked down on the activists killing and imprisoning several thousand men and women for demanding freedom. (BBC)

The regime slaughtered the democracy protesters. They gunned them down in the streets.

This is raw footage of the execution of Japanese journalist Kenji Nagai by the Burmese junta on September 27, 2007.

Today, Obama Secretary of State Hillary Clinton declared “The US is back” in Asia as she signed a non-aggression treaty with the killer Myanmar junta.
CNS News reported:

Secretary of State Hillary Clinton on Wednesday was to sign a non-aggression pact with a group of Southeast Asian nations, committing the United States to “renunciation of the threat or use of force” and to non-interference in other countries’ internal affairs.

Those countries include Burma, whose military junta has been targeted by U.S. sanctions since 1997, tightened in 2003, 2007 and 2008. Other parties to the pact include North Korea, whose nuclear weapons program, missile development and human rights record have been issues of concern for the U.S. for many years.

The Treaty of Amity and Cooperation (TAC) to be signed by Clinton in Thailand includes a provision that no party shall “in any manner or form participate in any activity which shall constitute a threat to the political and economic stability, sovereignty, or territorial integrity of another.”

Drawn up by the Association of Southeast Asian Nations (ASEAN) in 1976 and originally dealing only with relations among that grouping’s members, the treaty was amended in the late 1980s to allow countries outside the region to join.

Fifteen non-ASEAN countries have already done so, but the Bush administration demurred, even as China and India signed up in 2003, followed by Russia and South Korea in 2004, and close U.S. ally Australia in 2005.

The AP forgot to mention that the TAC non-aggression pact included Myanmar.

President Bush refused to appease the killer regime but did meet with Burma’s leading democracy activists.