Mother of ogled teen speaks out… “I would have boxed their ears!” 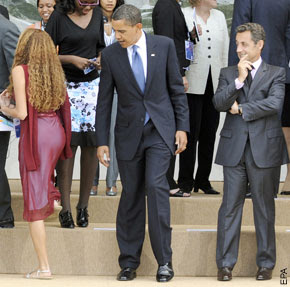 The family of the Brazilian girl ogled by President Obama and French Leader Sarkozy told reporters that the photo has “ruined the whole family.”
The New York Post reported:

The Secret Service might want to put a new threat on its watch list: the mad-as-hell mama of the 17-year-old Brazilian beauty ogled by President Obama and French leader Nicolas Sarkozy at the G8 summit last week.

“If I were there, I would have boxed their ears,” said Lucia Rodrigues, 37. “They should be ashamed of themselves.”

Patriarch Eduardo Tavares, after finally getting around to seeing the famous photo of his daughter from behind, quickly changed his tune from proud papa to furious father.

“My daughter is not a model and she is not a sex symbol,” he told The Post. “That photograph has ruined my whole family.”