Remember how the state-run media would pound George W. Bush every few months over soldier suicides to score political points?

The state-run media didn’t tell you that more soldiers committed suicide during the Clinton years than during the Bush years: 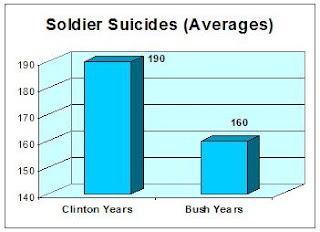 Well, don’t expect this news to make to many headlines…
More US soldiers are committing suicide now that Barack Obama is president.
France 24 reported:

Suicides in the US Army are on the rise with 88 suspected cases in the first six months of the year, compared to 67 in the same period in 2008, according to Pentagon figures issued.

The latest figures confirmed warnings from top US military officers that the number of suicides among active-duty soldiers this year was on track to surpass a record level set in 2008.

Last year 128 soldiers took their lives, up from 115 in 2007, amid increasing strain on Army troops serving repeated combat tours.

Of the 88 reported suicides this year, 54 have been confirmed and 34 are pending investigation, the Defense Department said in a statement.

In about 90 percent of previous cases, suspected suicides have been confirmed, officials say.

“Every soldier suicide is different and tragic in its own way,” said Brigadier General Colleen McGuire, director of the Army’s suicide prevention task force.