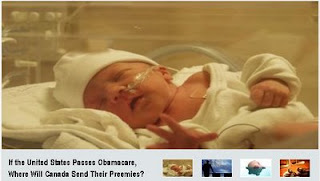 Health Reform: A critically ill premature baby is moved to a U.S hospital to get the treatment she couldn’t get in the system we’re told we should emulate. Cost-effective care? In Canada, as elsewhere, you get what you pay for.

Ava Isabella Stinson was born last Thursday at St. Joseph’s hospital in Hamilton, Ontario. Weighing only two pounds, she was born 13 weeks premature and needed some very special care. Unfortunately, there were no open neonatal intensive care beds for her at St. Joseph’s — or anywhere else in the entire province of Ontario, it seems.

Canada’s perfectly planned and cost-effective system had no room at the inn for Ava, who of necessity had to be sent across the border to a Buffalo, N.Y., hospital to suffer under our chaotic and costly system. She had no time to be put on a Canadian waiting list. She got the care she needed at an American hospital under a system President Obama has labeled “unsustainable.”

Jim Hoft over at Gateway Pundit reports Ava’s case is not unusual. He reports that Hamilton’s neonatal intensive care unit is closed to new admissions half the time. Special-needs infants are sent elsewhere and usually to the U.S.

In 2007, a Canadian woman gave birth to extremely rare identical quadruplets — Autumn, Brooke, Calissa and Dahlia Jepps. They were born in the United States to Canadian parents because there was again no space available at any Canadian neonatal care unit. All they had was a wing and a prayer.

The Jepps, a nurse and a respiratory technician flew from Calgary, a city of a million people, 325 miles to Benefit Hospital in Great Falls, Mont., a city of 56,000. The girls are doing fine, thanks to our system where care still trumps cost and where being without insurance does not mean being without care.

Infant mortality rates are often cited as a reason socialized medicine and a single-payer system is supposed to be better than what we have here. But according to Dr. Linda Halderman, a policy adviser in the California State Senate, these comparisons are bogus…