UPDATE: Jason Hunt sends this poster from WW I: 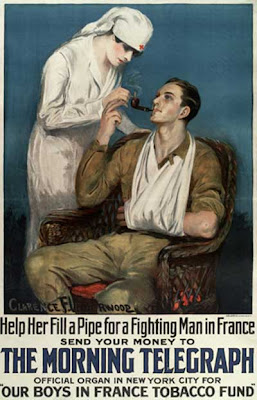 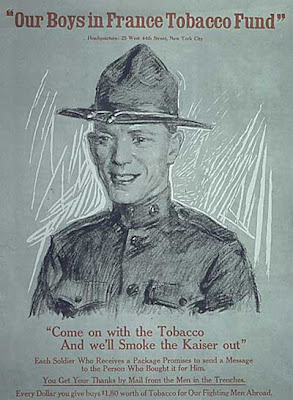 Despite the latest efforts by the Left to create more stress on the battlefield for our men and women in uniform, the Pentagon announced it would not ban smoking. 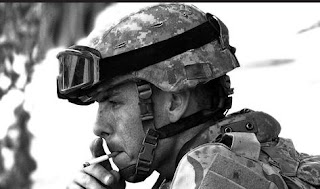 Lib kooks lost a major battle yesterday when the Pentagon announced that it won’t ban tocacco products in war zones.
The AP reported:

Smoke ’em if you got ’em. The Pentagon reassured troops Wednesday that it won’t ban tobacco products in war zones. Defense officials hadn’t actually planned to eliminate smoking — at least for now. But fear of a ban arose among some troops after the Defense Department received a study recommending the military move toward becoming tobacco-free — perhaps in about 20 years.

Press secretary Geoff Morrell pointedly told a Pentagon news conference that Defense Secretary Robert Gates is not planning to prohibit the use of cigarettes, chewing tobacco or other tobacco products by troops in combat.

“He knows that the situation they are confronting is stressful enough as it is,” Morrell said, noting the wars in Iraq and Afghanistan. “I don’t think he is interested in adding to the stress levels by taking away one of the few outlets they may have to relieve stress.”

With all the issues facing our military today and the risks our troops take to protect our freedom, banning smoking should not even be on the radar screen.

Nobody doubts the effects of smoking, but it is not an illegal substance and should not be banned. Our troops make enough sacrifices to serve our nation. They give up many of the freedoms civilians enjoy already without being told they cannot partake in yet another otherwise legal activity. Perhaps more than anything, smoking in the field is more about comfort and coping with an often hostile environment.

There is no compelling evidence that a smoking ban would improve overall military efficiency or effectiveness.