Unreal… They’re even lying about her hair.
Several state-run media outlets including The New York Times, Inside Edition, Keith Olbermann and the WaPo’s Chris Cillizza all spread the lie this week that Sarah Palin’s hair was thinning due to stress:

But, like the rest of the Sarah Palin attacks, it’s not true.
Conservatives 4 Palin reported:

Chalk this up as Stupid Palin Meme of the Week:In a July 12th hit piece published on the front page of the New York Times, reporters Jim Rutenberg and Serge Kovaleski (assisted by Kim Severson and William Yardley in Alaska) made the following claim:

Friends worried that she appeared anxious and underweight. Her hair had thinned to the point where she needed emergency help from her hairdresser and close friend, Jessica Steele.

“Honestly, I think all of it just broke her heart,” Ms. Steele said in an interview at her beauty parlor in Wasilla, the Beehive.

This tidbit was seized upon and has bounced through the Internet and blogosphere — a Google search for “Palin hair thinned” now returns nearly 400,000 hits. Lefties such as Eleanor Clift seized on it as some kind of meme that Palin can’t handle stress.

Well, Jessica Steele, proprietor of The Beehive and the Palin friend and hairdresser quoted by the NYT, is outraged at the claim and making it known through a forum immediately available – her Twitter feed.

It was just another state-run media lie.

Sarah Palin’s hairdresser Jessica Steele did not appreciate the lies told about her client Sarah Palin.
She was so upset she tweeted about it: 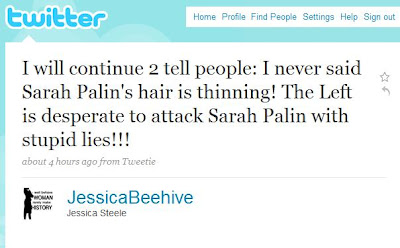 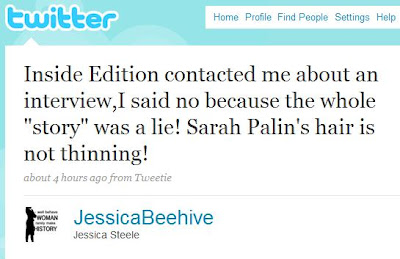