Honduran democracy protesters urged Obama not to join with Hugo Chavez and Raul Castro in siding with ousted President Zelaya. 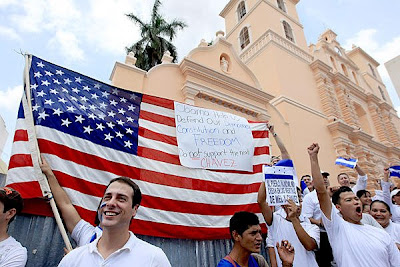 Message to Obama. “Obama, help us to defend our democracy, constitution and freedom. Do not support the following Chavez.” (Photo by Leonel Estrada- El Heraldo)

Wrong again.
Barack Obama explained why he is backing the ousted thug in Honduras during his speech today in Russia.
ABC News reported:

“America supports now the restoration of the democratically-elected President of Honduras, even though he has strongly opposed American policies,” the president told graduate students at the commencement ceremony of Moscow’s New Economic School. “We do so not because we agree with him. We do so because we respect the universal principle that people should choose their own leaders, whether they are leaders we agree with or not. “

The president’s remarks came in the midst of a speech in which discussed “America’s interest in democratic governments that protect the rights of their people” and supported Russian President Dmitry Medvedev’s call for judicial reforms in his country.

Of course, Obama forgot to mention this part:

The military, judiciary and Honduran congress removed the country’s president because he was attempting to illegally extend his tenure in office. – attempting a bloodless coup – in usurpation of that country’s constitution. The people of Honduras – in the form of that country’s military, judiciary and congress – stood up to tyranny by exorcising the Marxist cancer that threatened that nation’s sovereignty. Yet, the leader of the free world – and his secretary of state – sided with the tyrannical, calling for the reinstatement of ousted despot who tried to destroy their democracy.

The military removal of Zelaya as president – and the appointment of Roberto Micheletti as interim President by the Honduran legislature – came after Zelaya attempted to rewrite his nation’s constitution to end term limits to continue his rule, despite the fact that term limits in the constitution is one of eight “firm articles” that cannot be changed.

After the Honduran Legislature refused to call a constitutional convention to rewrite the constitution, Zelaya called for a referendum to do so, which the Honduran Supreme Court and Attorney General declared unconstitutional. Zelaya, allied with leftist Venezuelan President Hugo Chavez , fired top military commander Romeo Vásquez Velásquez for refusing to carry out the referendum. Every branch of government sided against Zelaya and Congress began discussing impeachment proceedings. Acting on orders from the Honduran Supreme Court, soldiers arrested Zelaya on June 28 and sent him into exile in Costa Rica.

For some reason Obama omitted these facts in his explanation(?)

HERE is the text of Obama’s speech today in Russia.