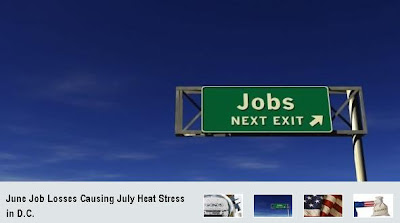 They say that heat stress makes you dizzy and heat exhaustion brings on a cold sweat. But, after the latest unemployment figures were released for June the Obama Administration is starting to show signs of heat stroke. It’s getting hot in Washington this July. And the White House is feeling the heat.

On January 10, 2009, President-elect Barack Obama released a report detailing the aggregate effect of a stimulus package on gross domestic product (GDP) and job growth by the fourth quarter of 2010. Obama officials claimed a stimulus of roughly 750 billion dollars would increase GDP by 3.7 percent and increase jobs by 3,675,000. This document stated, “A key goal enunciated by the President-Elect concerning the American Recovery and Reinvestment Plan is that it should save or create at least 3 million jobs by the end of 2010.”

A month later Barack Obama told an audience in Elkhart Indiana, on February 9, 2009:

We have inherited an economic crisis as deep and as dire as any since the Great Depression. Economists from across the spectrum have warned that, if we don’t act immediately, millions of more jobs will be lost. The national unemployment rates will approach double digits, not just here in Elkhart, all across the country. More people will lose their homes and their health care. And our nation will sink into a crisis that at some point we may be unable to reverse.

So we can’t afford to wait. We can’t wait and see and hope for the best. We can’t posture and bicker and resort to the same failed ideas that got us into this mess in the first place.

…The plan that we’ve put forward will save or create 3 million to 4 million jobs over the next two years, but not just any jobs, jobs that meet the needs we’ve neglected for far too long, jobs that lay the groundwork for long-term economic growth, jobs fixing our schools and computerizing our medical records to save costs and save lives, jobs repairing our roads and our bridges and our levees, jobs investing in renewable energy to help us move towards energy independence.

Later that month the US House of Representatives passed the democratic stimulus plan without a single Republican vote.

The president announced at the signing ceremony in Denver Colorado on February 18, 2009 that the legislation would save or create 3.5 million jobs. And, later that month Barack Obama told the Joint Session of Congress on February 25, 2009 that America was on its way to recovery thanks to the passage of the democratic stimulus package:

As soon as I took office, I asked this Congress to send me a recovery plan by President’s Day that would put people back to work and put money in their pockets. Not because I believe in bigger government – I don’t. Not because I’m not mindful of the massive debt we’ve inherited – I am. I called for action because the failure to do so would have cost more jobs and caused more hardships. In fact, a failure to act would have worsened our long-term deficit by assuring weak economic growth for years. That’s why I pushed for quick action. And tonight, I am grateful that this Congress delivered, and pleased to say that the American Recovery and Reinvestment Act is now law.

Over the next two years, this plan will save or create 3.5 million jobs. More than 90 percent of these jobs will be in the private sector – jobs rebuilding our roads and bridges; constructing wind turbines and solar panels; laying broadband and expanding mass transit.

It’s been five months now. In January, Team Obama promised that with the Stimulus bill unemployment would peak at 8.0 percent. Unemployment is currently at 9.5 percent with the stimulus and will likely increase this year.