Here’s a good idea…
Let’s sit down and negotiate with these lying killers. 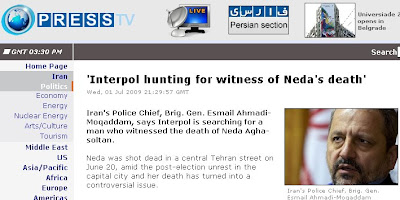 The International Police force, or Interpol, has denied a claim by Iran’s police chief that it is seeking a doctor who witnessed the shooting death of 26-year-old “Neda.”

Does Dear Leader really believe this is a regime that can be trusted?