There is a MASSIVE demonstration taking place in Tehran today.
One eyewitness estimates crowd more than a million, filling streets from Tehran University to Vali Square. 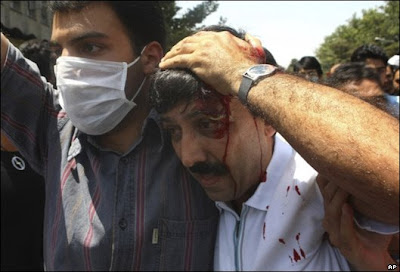 Here’s a photo sent from Iran.

Outside the Tehran’s central mosque at the Friday prayer where Hashemi-Rafsanjani came to speak, Iranians chanted: “Hashemi, if you remain silent, you are a traitor!”

Iranian activist Banafsheh Zand-Bonazzi translated and is following the massive protest today on her Facebook page.

Former President Ali Akbar Rafsanjani called for the release of prisoners during his sermon today at Tehran University.
The Times Online reported:

Iranian police fired tear gas and used batons to disperse thousands of demonstrators outside Tehran University today as a former president who is backing the opposition movement led Friday prayers for the first time since the disputed election.

Hojatoleslam Ali Akbar Hashemi Rafsanjani, the influential head of the Assembly of Experts and key supporter of the opposition leader Mir Hossein Mousavi, called for prisoners to be released as he preached inside the campus that Iran was in crisis.

Demonstrators gathered at the university, which has been a regular focus of the protests, despite a violent crackdown by the authorities, only to be met by a wall of officers who have made at least 15 arrests according to a witness.

The Revolutionary Road is liveblogging. 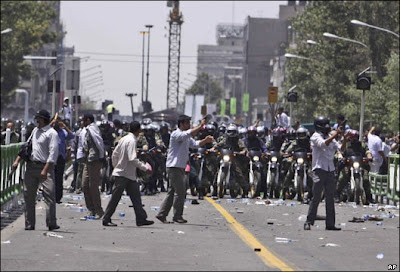 BBC Persia has photos from today.

Jim Hoft
Jim Hoft is the founder and editor of The Gateway Pundit, one of the top conservative news outlets in America. Jim was awarded the Reed Irvine Accuracy in Media Award in 2013 and is the proud recipient of the Breitbart Award for Excellence in Online Journalism from the Americans for Prosperity Foundation in May 2016.
BREAKING: Mitt Romney Speaks Out - Says He's in Favor of Senate Vote on Supreme Court Vacancy (VIDEO)
US Marshals Recover 35 Missing Northeast Ohio Children Ages 13 to 18
Unhinged Quebec Woman Pascale Ferrier Identified as Suspect in Case of Ricin Letter Sent to Trump White House
GOOD! DOJ REFUSES to Send Top Civil Rights Official and Heads of Border Patrol and US Marshals to Testify Before Nadler's Committee after Bill Barr Debacle
Senator Lindsey Graham: "We've Got the Votes to Confirm the Justice on the Floor of the Senate BEFORE the Election" (VIDEO)
See more...