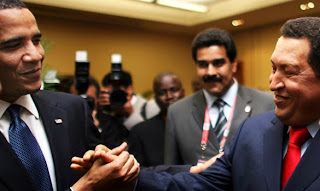 Venezuelan Marxist Hugo Chavez warned Barack Obama this weekend that he is biting off more than he can chew.
Agreed.
The Hill reported:

On Venezuelan President Hugo Chavez’s “Alo Presidente!” show — an hours-long talkfest that is broadcast on TV and radio by mandate — last Sunday, Chavez both criticized President Obama and fretted about the possibility of an assassination. In Chavez’s own words…

** On Obama: He “is not going to trick us with an ambiguous discourse or with a smile,” and he wants to be seen “as a peaceful dove, as an innocent lamb.”
** On the “imperial” U.S. forces that Chavez thinks killed JFK: “I hope they do not kill Obama, because Obama is biting off more than he can chew.”
** On his Bolivarian revolution: “The process of change in Latin America is not going to stop, President Obama. You can send the Fourth and the Sixth Fleet, or the world’s largest bombers, but changes will not end.”
** On the responsible parties for the Honduras overthrow: “The Central Intelligence Agency (CIA), the US Department of State and the Pentagon.”

Unlike Obama, Chavez is an accomplished Marxist who paced himself in socializing and destroying the Venezuelan economy.