How Much of This Hope & Change Disaster Can Americans Take? 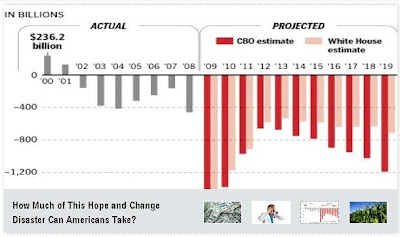 How Much of This Hope & Change Disaster Can Americans Take?

It’s time to put down the Kool-Aid. It’s time to quit chasing unicorns. It’s time to stop the Hopey-Changey advertising campaigns. It’s time for reporters to quit bowing and for legs to stop tingling. Hope and Change may have made a good slogan but as policy it’s a disaster. Sadly, not everyone understands this. Rasmussen reports released their latest economic polling this past weekend. Rasmussen reported on Sunday that democrats actually believe the economy is better today than it was a year ago:

Over the past year, overall levels of consumer confidence have bounced around a lot but ended up with little change. For the full month June 2008, the Rasmussen Consumer Index was at 71.9. In June, 2009, that number was 72:0.

But underneath those stable topline numbers is a dramatic shift along party lines. A year ago, Republicans were far more confident than Democrats. Today, the reverse is true.

It’s hard to believe that anyone would think the economy is better today than it was a year ago. But, that’s what the polling is telling us. Democrat’s confidence in the economy jumped from 53.7 percent a year ago to 79.5 percent this year. This is really unbelievable. Granted it would be difficult to persuade these diehards otherwise, but let’s take a look at the economic numbers. These results should tell us a thing or two about these fanatics.

Unemployment:
The US lost over 2.5 million jobs in the first four months of this year under the Obama Administration. The US economy lost 598,000 jobs in January, 706,000 jobs in February, 742,000 jobs in March, 545,000 jobs in April, 485,000 jobs in May, and 473,000 jobs in June. That’s a total of 3,549,000 lost jobs since the beginning of this year. The US unemployment rate has risen from 7.6 percent to 9.5% percent under Obama, the highest rate in 26 years. The Bureau of Labor Statistics– via Sweetness and Light released a map of the unemployment rate over the last ten years. It’s not pretty. The US has lost 16,000 jobs each day since Democrats passed their non-Stimulus bill, the largest redistribution of wealth from the private sector to government officials in US history. President Obama promised that the unemployment rate would not rise above 8.0 percent with the Stimulus. Today, he says it will climb over 10 percent.

There’s much more.
You can read the rest here. There is also a list of my recent columns on this page.