Although this did not make any headlines in the state-run media, there was a massive protest in support of President Roberto Micheletti today. 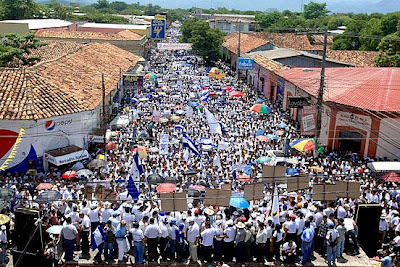 Thousands of Hondurans demonstrated in support of Micheletti and against Chavez-lackey Manuel Zelaya who was ousted on Sunday after he tried to remain in office illegally. (El Heraldo) 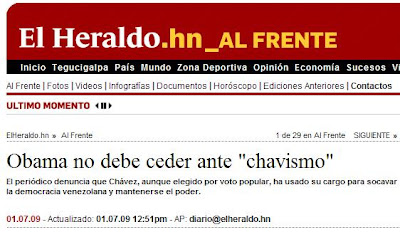 The president should not allow Barack Obama a victory of “Chavism” in Honduras and should take into account that the impeachment of president Manuel Zelaya was made by order of the Supreme Court and of respect for institutions, said Wednesday the Wall Street Journal.

Zelaya was plotting to remain in power, the Journal reported in an editorial. He added that the Honduran president had help from Venezuelan President Hugo Chávez to reform the constitution to run for reelection and to meet its target as it did the same Chavez.

“The events of Honduras should be interpreted in light of the decade of chavismo in Latin America,” said an editorial in the Journal.

Obama has joined with Marxists Hugo Chavez, Daniel Ortega and Raul Castro to condemn the “coup” against Leftist Manuel Zelaya.