Obama Continues Meddling in Honduras–
The Honduran government said they have identified Venezuelans, Cubana and Nicaraguans protesters at the pro-Zelaya rallies- El Heraldo. 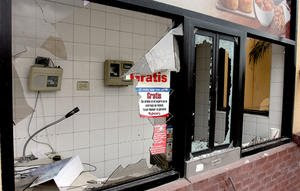 The Leftist and Marxist Zelaya supporters destroyed a restaurant yesterday after their protests against the government. (El Heraldo)

U.S. Secretary of State Hillary Clinton is expected to meet ousted Honduran President Manuel Zelaya in Washington on Tuesday, a U.S. official who spoke on condition of anonymity said on Monday.

The official provided no other details.

Such a meeting would be significant gesture of support for Zelaya, who was pushed out of office by troops and flown into exile in Costa Rica on June 28 in a coup largely triggered by a dispute over presidential term limits.

“Our goal remains the restoration of … the democratic order in Honduras, and we renew our call on all political and social actors in Honduras to find a peaceful solution to this crisis,” he told reporters.

My emphasis, as the convention phrases it. And it deserves emphasis because, in that brief statement, Obama has just reversed the Monroe Doctrine, dating from 1823, and the later Roosevelt Corollary. The principle that European influence would not be permitted in Latin America gradually translated into a recognition that Latin America was a US sphere of influence. Since Marxism is a European influence, surely it is important to exclude that poison, so far as is practicable, from Latin America.

Yet Obama has aligned himself with the so-called Bolivarian Alliance of Marxist fruitcakes, led by Hugo Chavez of Venezuela and Daniel Ortega of Nicaragua. To both men “democracy” is a useful slogan while they pursue its elimination in their own back yards.