It was a rough crowd.
Liberal Representative Russ Carnahan (D-MO) held a health care town hall meeting in St. Louis yesterday. Several members of the Tea Party Coalition attended the event.
Carnahan tried to persuade the crowd that Obamacare was a big money saver… It’s too bad for Carnahan that the audience actually knew about last week’s CBO report.
They weren’t buying it.
The audience snickered, jeered, laughed at and erupted several times during the forum. 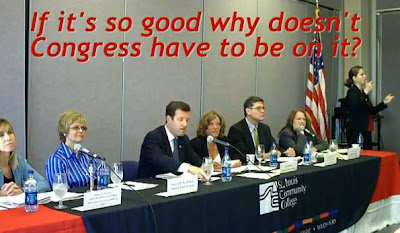 This obviously wasn’t the typical audience Russ Carnahan was used to speaking to.
They weren’t buying into his obvious mistruths about Obama’s plan to socialize the nation’s health care system.
Great job, St. Louis!

By the way… That was Kevin Jackson asking Carnahan, “If it’s so good why doesn’t Congress have to be on it?”

It was a rough day for Carnahan– First he got clobbered on the radio, then this.