It figures. Obamacare will cover 12 million or more illegal aliens living in the United States. 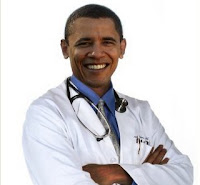 On Friday, Democrats moved one step closer to giving free health insurance to the nation’s estimated 12 million illegal aliens when they successfully defeated a Republican-backed amendment, offered by Rep. Dean Heller, R-Nev., that would have prevented illegal aliens from receiving government-subsidized health care under the proposed plan backed by House Democrats and President Barack Obama.

The House Ways and Means Committee nixed the Heller amendment by a 26-to-15 vote along straight party lines, and followed this action by passing the 1,018-page bill early Friday morning by a 23-to-18 margin, with three Democrats voting against the plan.

The Democratic plan will embrace Obama’s vision of bringing free government medical care to more than 45 million uninsured people in America – a significant portion of whom are illegal aliens.

That’s not all…
This past week Doug Elmendorf, director of the nonpartisan Congressional Budget Office, told Congressional leaders that Obamacare will not reduce federal health spending and the legislation would significantly expand the federal responsibility for health care costs. The actual hit to the federal deficit for this program alone exceeds $239 billion over the next decade.

Related… M. Barry adds, “When The Boston Globe is running a piece noting Dear Leader is having troubles ramming multi-trillion dollar legislation through, you know he’s got problems.”