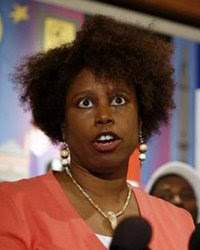 The last time we heard from Cynthia McKinney she was speaking at a Jew-bash at the University of California, Irvine.

Today the hateful nutjob sits in an Israeli jail after her attempt to break through a blockade into Hamas-controlled Gaza.
FOX News reported:

Former U.S. lawmaker and Green Party presidential candidate Cynthia McKinney and several other human rights activists remained in an Israeli prison Thursday after refusing to sign a deportation form that they claim is self-incriminating.

In a press release from the Green Party, McKinney said the form states that the Spirit of Humanity, a Greek-flagged relief boat carrying 21 activists, medical supplies, cement, olive trees and children’s toys en route to Gaza, was violating the Israeli blockade and trespassing the country’s territorial waters.

“We were in international waters on a boat delivering humanitarian aid to people in Gaza when the Israeli Navy ships surrounded us and illegally threatened us, dismantled our navigation equipment, boarded and confiscated the ship,” she said in a statement, adding that they were immediately taken into custody.

“Immigration officials in Israel said they did not want to keep us, but we remain imprisoned,” she said.

“State Department and White House officials have not effected our release or taken a strong public stance to condemn the illegal actions of the Israeli Navy of enforcing a blockade of humanitarian assistance to the Palestinians of Gaza, a blockade that has been condemned by President Obama.”

More… Crackpot McKinney speaks from her jail cell– “We were delivering crayons.”