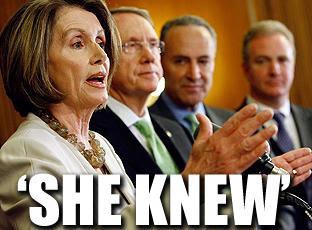 Then at her next press conference in May the Speaker said the CIA were the liars, not her.
Unbelievable.

Today Dems continued their attacks on the CIA to cover Speaker Pelosi’s a$$.
FOX News reported:

“I’ve seen the letters from the members and obviously they have concern,” Pelosi said about the letters written by Democrats on the House Intelligence Committee and revealed Wednesday.

“The Intelligence Committee has the oversight responsibility for intelligence in the House and its equivalent committee in the Senate,” Pelosi said at her weekly news conference. “I’m sure they will be pursuing this in their regular committee process and that’s the way it will go.”

But Republicans say the allegations are just political maneuvering to protect Pelosi, who has been under constant fire since alleging that the CIA lied to her about enhanced interrogation techniques.