A Vancouver reporter accused Free Republic of allowing racist comments this weekend.
But, oddly enough, this same Vancouver Sun reporter, Chris Parry, has a very controversial background. He has advocated on Daily Kos for liberals to post hate speech on conservative blogs and blame it on conservatives.
What a strange coincidence?
Gawker reported:

But the real story here is that this same reporter and Daily Kos contributer has advocated on his Daily Kos blog any number of egregious offenses, among them: posting hate speech on sites like Free Republic and blaming it on conservatives.

It gets worse, though. Chris Parry, it appears, has advocated on his Daily Kos blog any number of egregious offenses, among them: posting hate speech on sites like Free Republic and blaming it on conservatives. Parry posted under the name “hollywoodoz” on Daily Kos, where his signature was “Fool me once, I’ll punch you in the f*cking head.” Parry outed himself as hollywoodoz here, where he discloses the company he helped start. In essence: Parry, the journalist, found his story right where he’d been circling it for a very long time, and reported it as news. Sigh.

Bottom line: Parry’s noble intentions are paving him a road to hell…

Jammie Wearing Fool reports that “naturally the Freepers are tearing him a new one.”

Chris Parry has advocated attacking blacks and blaming Republicans.
Here is one of his comments on Daily Kos: 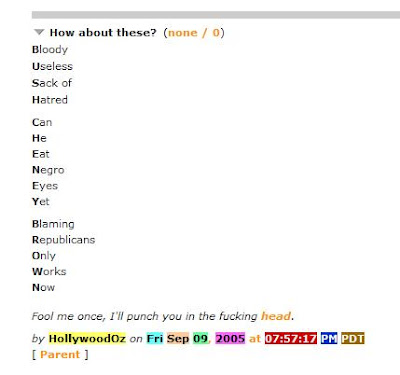 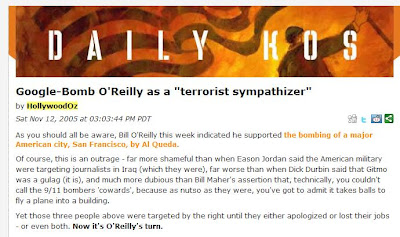 Google-Bomb O’Reilly as a “terrorist sympathizer”

Just when you thought things couldn’t get any crazier, a warped diarist from the Daily Kos hate-site is attacking a conservative website for hate speech.