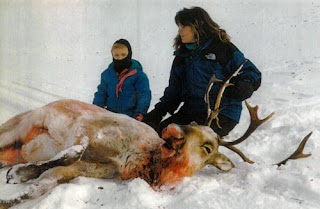 Sarah Palin with her daughter at a caribou hunt. (FR)

In a recent interview with Politico Ron Paul bashed Sarah Palin for being a “conventional, country-club type of Republican”:

“I wonder whether she’s energizing the 15-20 year olds,” Paul muses. “That would be a question I would have. Because she doesn’t talk about the Federal Reserve and some of these issues. She doesn’t talk too much about personal liberties, civil liberties, getting rid of drug laws, attacking the war on drugs, punishing people who torture.”

Libertarian Republican reports there is no evidence of Palin ever being a member of a country club.

However, Ron Paul and his wife Carol are lifetime members of the Lake Jackson Country Club– “The Riverside Country Club of Lake Jackson.” It is located on Highway 332 in between Lake Jackson and Brazoria.
If anything, country club republicans despise her.