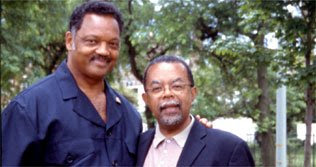 Professor Henry Louis Gates, shown here with his friend Jesse Jackson, was arrested by a white police officer for disorderly conduct after he verbally attacked the officer with vicious racial slurs.

Congress would demand that President Obama apologize to the officer the president said had “acted stupidly” in the arrest of a prominent Harvard professor under a resolution set to be introduced by one Michigan lawmaker.

Rep. Thaddeus McCotter (R-Mich.) will introduce a House resolution on Monday demanding Obama retract and apologize for remarks he has made about Cambridge Police Sergeant James Crowley this past week.

Obama had said at his prime time press conference Wednesday that Crowley had “acted stupidly” in the arrest of Harvard professor Henry Louis Gates, a racially-infused case which has sparked a national debate on race and policing.

The president refused to back down on his involvement in the case, but appeared in the White House briefing on Friday to say he had called Crowley to explain that never meant to insult the officer. (Obama also called Gates on Friday.)