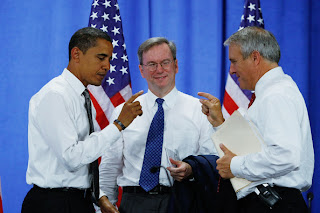 Democratic presidential nominee U.S. Sen. Barack Obama (D-IL) speaks with Eric Schmidt, Chairmen and CEO Google (C) and Colorado Governor Bill Ritter during the “Growing American Jobs” summit. (Zimbio)
For the record– There’s been a total of 3,549,000 jobs lost since the beginning of this year.

Colorado Gov. Bill Ritter has awarded some of the state’s first stimulus money to his former employer in a no-bid contract.

Ritter hired his former law firm, the Washington-based Hogan & Hartson, in a no-bid contract to review stimulus spending, The Denver Post reported Friday. It said the firm was paid $40,000 in stimulus money through June.

Aides to the governor insisted the contract was properly awarded. The state attorney general’s office deemed the contract necessary to allow the state to have speedy legal advice about stimulus money. The contract is too small to require competitive bidding.

Ritter worked for the Denver office of Hogan & Hartson in 2005, leaving the following year when he ran for governor. The law firm has about 1,300 lawyers across the country and specializes in public finance, real estate, white-collar litigation and environmental and governmental regulation.

Oh, by the way… The article didn’t mention this but Governor Ritter is a democrat.