Well, what do you know?
The state-run media can do research. It only took them 8 months after the election to release this crazy Far Left anti-American article Barack Obama wrote while in college. 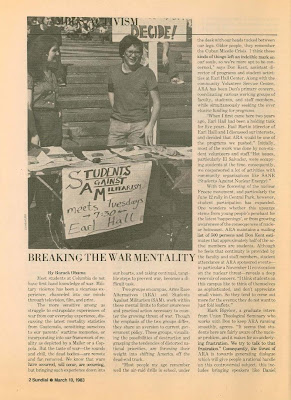 Andy McCarthy at The Corner has the story:

Nearly six months into the Obama presidency, the mainstream media has finally done a bit of the candidate background reporting it declined to do during the campaign — other than in Wasilla — and whaddya know? The New York Times unearthed a 1983 article called, “Breaking the War Mentality,” that Columbia student Barack Obama wrote for a campus newspaper. The article shows that Obama dreaded American “militarism” and its “military-industrial interests,” while effusing enthusiasm for the dangerously delusional nuclear-freeze movement.

Moreover, while indicating a preference for the political wisdom of reggae singer Peter Tosh over Ronald Reagan or Scoop Jackson, Obama bewailed the “narrow focus” of anti-militarism activists, worrying that they were targeting the “symptoms” rather than the real “disease,” namely, America’s underlying economic and political injustice… Student Obama summed up with near incoherent Lefty gobbledygook:

Indeed, the most pervasive malady of the collegiate system specifically, and the American experience generally, is that elaborate patterns of knowledge and theory have been disembodied from individual choices and government policy. What the members of ARA and SAM try to do is infuse what they have learned about the current situation, bring the words of that formidable roster on the face of Butler Library, names like Thoreau, Jefferson, and Whitman, to bear on the twisted logic of which we are today a part. By adding their energy and effort in order to enhance the possibility of a decent world, they may help deprive us of a spectacular experience — that of war. But then, there are some things we shouldn’t have to live through in order to want to avoid the experience.

how long do you suppose the NT Times has been sitting on this piece?

Today, the kook landed in Russia and is going to try to talk the Russians into disarming. It’s more likely that he will sell out our allies in Poland and the Czech Republic instead.
It’s all part of that hope and change we’re getting used to.
Thanks, New York Times.