It was the neighbors– They do stuff like this all the time. 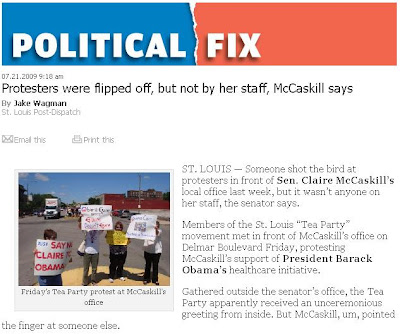 The St. Louis Post-Dispatch came to Senator Claire “ACORN” McCaskill’s defense after it was widely reported on the internet that her staffers were flipping the bird at constituents protesting outside her office.

ST. LOUIS — Someone shot the bird at protesters in front of Sen. Claire McCaskill’s local office last week, but it wasn’t anyone on her staff, the senator says.

Gathered outside the senator’s office, the Tea Party apparently received an unceremonious greeting from inside. But McCaskill, um, pointed the finger at someone else.

“I was able to figure out the allegation about my staff flipping off protestors at my St Louis office on Friday,” McCaskill wrote on her personal blog Monday. “There was only one male staffer at the office on Friday, and I knew he wouldn’t do that. He is an Iraq veteran, who handles almost all of our case work for our veterans. He is soft spoken and hard working and just not the type to lose his cool.”

So who’s the culprit? McCaskill said the neighbors have admitted fault.

“Our office only occupies the first floor, and a marketing and advertising firm has the office space above us on the second floor,” McCaskill wrote. “They acknowledged that one of the men that works in their offices made the gesture.”

By the way… The P-D lifted a photo from my blog for their article.