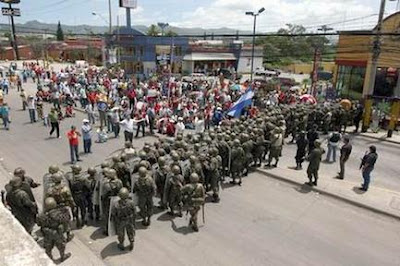 Leftist supporters for former President Zelaya rallied at the national airport before his return. (El Heraldo)

The military, judiciary and Honduran congress removed the country’s president because he was attempting to illegally extend his tenure in office. Latin American Marxists Raul Castro, Daniel Ortega and Hugo Chavez rallied around ousted Honduran President Manuel Zelaya in Managua this week.
So did Barack Obama.

Thanks to Barack Obama, today Former President Manuel Zelaya attempted to return to Honduras.
But, the pro-government military refused to allow Zelaya to land at the main Honduras airport. Zelaya instead landed in Nicaragua on his way to El Salvador, and vowed to try again Monday or Tuesday.

The Salesian Cardinal Oscar Rodriguez of Honduras is speaking out on the political situation there. He told the exiled President Manuel Zelaya to stay away!

Marxist Hugo Chavez says that, “Obama is a prisoner of the Empire,” and that he needs to speak out loudly on the matter. 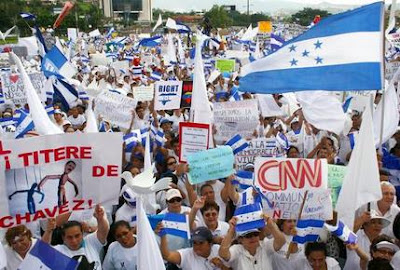 UPDATE: Legal Insurrection is reporting on this staged photo published by Reuters… the blood was not his: Hunter Smith was at the protests today at the Honduran airport.
More here.

Fausta is following the developments.

UPDATE 2: The old man with the blood was a hit.
Here’s another photo but they must have smeared more blood on him between shots- 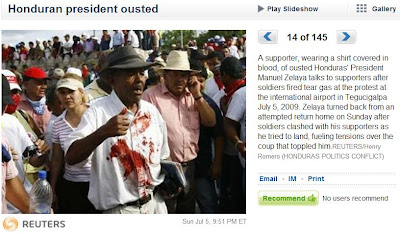 UPDATE 3: Here’s another one.
The Horror! An injured protester needs a Band-Aid. 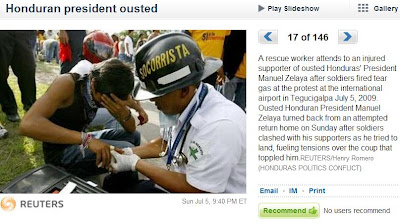