Susan Roesgen, the CNN reporter who attacked Tea Party protesters on the air at a Chicago rally, was canned by the liberal network this week.
Buh-Bye 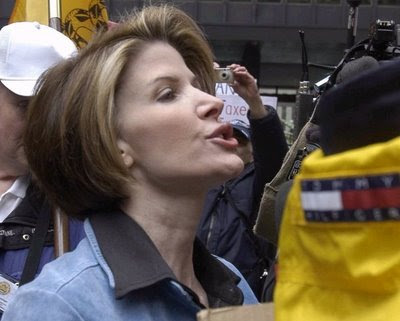 Flying Debris was there and took this photo of Susan lecturing the right-wing extremists on the Dear Leader’s many virtues.

Breaking: TVNewser has learned CNN correspondent Susan Roesgen’s contract will not be renewed and she will be leaving the network.

Roesgen, you’ll recall, was criticized for her coverage at the tax day tea parties in April, when she said the event she was covering in Chicago was, “anti-CNN since this is highly promoted by the right-wing, conservative network Fox.”

Roesgen took a break for a few weeks after that reporting and returned to the air in May covering the Drew Peterson arrest. Most recently, she covered Michael Jackson’s death from Los Angeles. Roesgen joined CNN in 2005.

** Founding Bloggers has exclusive video from the Chicago Tea Party after CNN’s Susan Roesgen became belligerent with a protester and the cameras cut back to the studio.