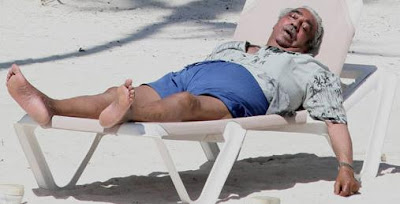 As Charlie Rangel demonstrates, spending all of your money and your children’s money is exhausting work.
Even Congress needs a little vay-cay every once in awhile.

Remember— This is not a Shared Sacrifice Recession.
The Pelosi-Reid Congress is not only spending more of your money and giving themselves raises and bonuses they are also spending more on exotic excursions than ever before.
The Wall Street Journal reported:

Spending by lawmakers on taxpayer-financed trips abroad has risen sharply in recent years, a Wall Street Journal analysis of travel records shows, involving everything from war-zone visits to trips to exotic spots such as the Galápagos Islands.

The spending on overseas travel is up almost tenfold since 1995, and has nearly tripled since 2001, according to the Journal analysis of 60,000 travel records. Hundreds of lawmakers traveled overseas in 2008 at a cost of about $13 million. That’s a 50% jump since Democrats took control of Congress two years ago.

The cost of so-called congressional delegations, known among lawmakers as “codels,” has risen nearly 70% since 2005, when an influence-peddling scandal led to a ban on travel funded by lobbyists, according to the data.

Of course, this would only be shocking news if the reverse was true.

Remember: These are the same gasbags who scolded auto execs for taking private jets to DC.