When did the Left start supporting rape?
It’s really unbelievable that this raping conservative women story still has legs.

The latest Leftist reporter to back hate raping conservative women is Bonnie Erbe at US News and World Report. 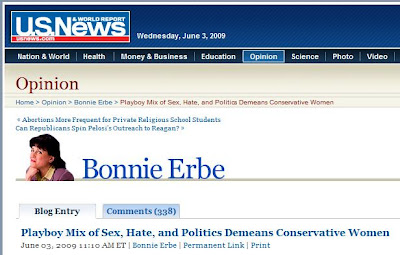 Teri Christoph, whom I have never met, asked me to stand up for conservative women who were maligned by an online article on Playboy magazine’s website. The article has since been taken off the site, but the gist of it was, indeed, disgusting, sexist, of course pornographic, and demeaning to conservative women. The article contained a list of conservative female media commentators whom the author said men would like to, er, have sex with but hate at the same time, or something nonsensical like that. Ms. Christoph sent me a link to a cached page of the now-removed article.

…I also want to note that at least one woman on the list is so venom-spewing, she unfortunately invites venom to be shot back at her: Michelle Malkin. Her posts and her “routine” are so venomous and predictable, in fact, I stopped paying attention to her years ago.

Others on the list, however, are not venom-spewing at all. One woman mentioned on the atlasshrugs2000 blog is a regular guest on my PBS show. Amanda Carpenter, on the show at least, eschews personal judgment of people with whom she disagrees politically. So her inclusion on the Playboy list is much more offensive to me than is the inclusion of Ms. Malkin, although their political views may not differ greatly.

So now the Left believes that raping conservative women may be a bad thing…
Unless they deserve it.
That’s freakin scary.

UPDATE: Erbe now says she does not back hate rape. That’s good.
…She just backs violence against conservative women when they deserve it.
Nice.

UPDATE 2: NewsBusters has some advice for Bonnie Erbe.