The Gaza terrorists riding horses with huge amounts of explosives were linked to Iran and Hezbollah. 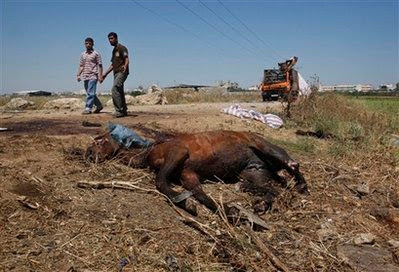 Under the cover of morning fog, a group of around 10 Palestinian gunmen armed with “huge amounts of explosives” launched a failed Gaza border assault at the Karni Crossing on Monday, in which booby-trapped horses were used, a security source told the Jerusalem Post.

At least four terrorists were killed in an ensuing exchange of fire with the IDF. No Israeli soldiers were wounded in the incident.

The terror cell belonged to the Janud Ansar Allah (Soldiers Loyal to Allah) organization, a small group which is linked to Iran and Hizbullah, the security source added.

Members of the cell, some of whom had suicide bomb belts strapped around their bodies, led the horses off of trucks and began planting explosive devices along the fence. They were identified by IDF soldiers on patrol, of Golani’s 13th Battalion. The gunmen proceeded to open fire on the troops, while mortar fire from deep within the Gaza Strip was also directed at the soldiers.

Soldiers returned fire, and called for backup. At first, tanks were dispatched to the scene, and fired on the terror cell. Air Force combat helicopters then joined the fight, also firing on terrorist targets from above.

“A very big terror attack was thwarted,” the security source said. “These terrorists were armed with a huge quantity of explosives. They launched a combined attack, using mortars, and attempted to approach the border fence with booby-trapped horses to harm our soldiers, before firing on our force.”

Yid with Lid has more on the attack.