Unreal! The Obama Administration kept the Gitmo Uighur deal from Great Britain– Even as they were negotiating with the British overseas territory of Bermuda to dump a few of the Gitmo detainees. 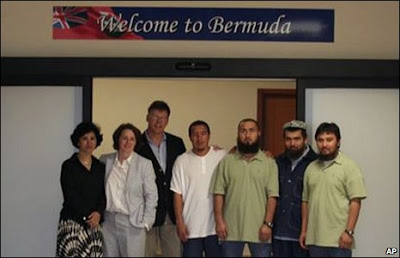 More Hope and Change!
Team Obama just crapped all over America’s staunchest ally.
The White House kept their Gitmo negotiations with Bermuda from the British government.
The BBC reported:

A senior US official has told the BBC Washington decided not to tell London ahead of time about a deal to resettle four Guantanamo detainees in Bermuda.

A diplomatic row blew up over Bermuda’s decision to accept the four Chinese Muslim Uighurs on a US request.

Bermuda is a British overseas territory but the US official said Washington had acted secretly to ensure success.

Meanwhile the US said on Friday three Saudis at Guantanamo Bay had been transferred back to Saudi Arabia.

The transfers are part of US President Barack Obama’s strategy to close down the Guantanamo detention centre before next January.

Several of the Uighur terrorists were trained by Al-Qaeda at terror training camps. FOX News reported that some of the Uighur detainees were trained in Tora Bora. They are also linked to the terror group that was planning attacks on the Beijing Olympic.

More… The United Bermuda Party today moved for a motion of no confidence against the Government led by Premier Ewart Brown for accepting the Uighur terrorists from the US.