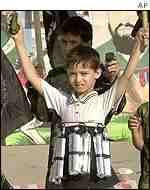 (Amboy)
The Taliban is buying up children for a few hundred thousand rupes for suicide missions.
Kuwait News Service reported, via ROP:

A Pakistani Federal Minister Monday said that militants were using kidnapped children as suicide bombers across the country.

Federal Interior Minister Rehman Malik talking to newsmen here said that the militants were buying innocent children for few hundred thousand rupees and using them to carry out suicide attacks.

He further said that the militants are getting weapons and ammunition from Afghanistan, adding that the government of Pakistan has taken up the matter with Afghan President Hamid Karazai.