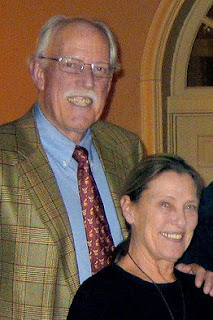 Spy kooks Walter Kendall Myers and his wife, Gwendolyn. Walter was born with a silver spoon in his mouth and yellow teeth. (Wall Street Journal)

“Occasionally, he would voice frustration with U.S. policies,” noted the Washington Post of Walter Kendall Myers, the aging New Leftist recently arrested with his wife, Gwendolyn, on charges of spying for Cuba. “But to his liberal neighbors in Northwest D.C.,” the story continued, “it was nothing out of the ordinary. ‘We were all appalled by the Bush years,’ one said.”

In this account and others, the Myerses seem less like shady characters out of a spy novel than like some of the more adamant residents of the leafy, left-of-center New York suburb where I live. They, too, as the Post has it, manifest “a deep and long-standing anger toward this country,” and they certainly share Mr. Myers’s rage, as recorded in his diary, at America’s oil companies and health-care system.

That the Myerses’ politics appear indistinguishable from today’s garden-variety left-liberalism has not been lost on conservatives. One wag on the Web speculated that the couple would beat the rap by pleading insanity based on Bush Derangement Syndrome. “Here’s the shocking part (kidding),” noted Gateway Pundit‘s Jim Hoft. “A Walter Myers from Ashburn, Virginia donated to the Obama Campaign this past year.”

In fact, the alleged spooks are walking clichés, their every political and social attitude reflecting the mix of self-righteousness and naïveté that is the basis of post-1960s liberalism. Hugely privileged — the great-grandson of Alexander Graham Bell, Mr. Myers went to prep school and sailed a 38-foot sloop — the couple idealized the poor. Seamlessly, they moved from antiwar activism to pro-abortion activism and then, in the fullness of time, along with everyone else, to environmentalism. He was an academic — enough said. She got into politics, like so many others, via the McGovern campaign. They grew pot in their basement. And, yes, they spied on behalf of Castro’s murderous regime not for the money but on principle.