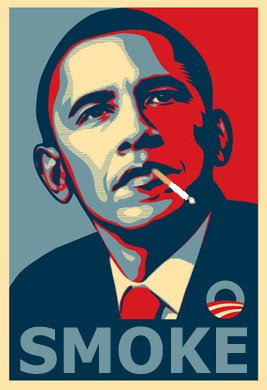 Smoker in Chief Barack Obama praised the Big Tobacco grab today as he signed legislation that will give government unprecedented authority to regulate tobacco products.
The AP celebrated:

Congress sent legislation to the White House Friday granting the federal government unprecedented authority to regulate and restrict cigarettes, the single largest cause of preventable death.

President Barack Obama quickly expressed his support, appearing in the Rose Garden almost immediately after the House gave final approval to the bill giving the Food and Drug Administration control over tobacco production, marketing and sales.

For more than a decade, Obama said, leaders in Congress have been trying to prevent the marketing of cigarettes to children “and provide the public with the information they need to understand what a dangerous habit this is.” He said the outcome was “a bill that truly defines change in Washington.”

Rep. Henry Waxman, D-Calif., chief sponsor of the House version, called it “the single most important thing that we can do right now to curb this deadly toll.”

Michelle Malkin adds: What know-nothing crony will they put in charge this time? Maybe when Brian Deese and Edward Whitacre are done fixing the auto industry they know nothing about, the White House will make them tobacco execs.
Or Tar Czars.