Set down the coffee… Michael is not the father. 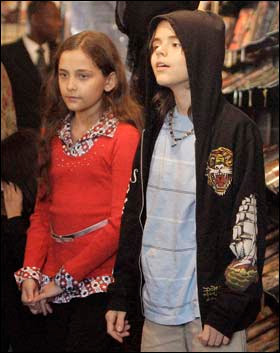 Debbie Rowe, the former wife of Michael Jackson, says that Michael is not the father.
News of the World reported:

MICHAEL Jackson’s two eldest kids face a tug-of-love battle after their mum Debbie Rowe confessed he was not their father.

In an astonishing interview Debbie – mother of Prince, 12, and Paris, 11 – said she was artificially inseminated by an anonymous donor.

And she told how, despite Jackson’s death, she does not WANT custody of the children and NEVER expects to see them again.

Michael Jackson’s ex-wife Debbie Rowe wants her children back after selling them to Jackson.

British reporter Ian Halperin wrote today that Michael Jackson had no voice and at 5’10” and 125 pounds, he had no strength to perform. His medical team even believed he was anorexic. Jackson also reportedly left as many as 200 unpublished songs that for his children after his death.