Rupert Murdoch sees the danger in Obama’s policies and thinking.
The media mogul predicts unemployment at 10-11%:

The way unemployment is soaring under Obama, Murdoch may have lowballed the number. 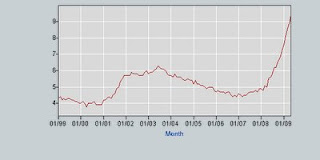 The US lost over 2.5 million jobs in the first four months of this year under the Obama Administration.
The US unemployment rate rose from 7.6% to 9.4% under Obama… the highest rate in 25 years.