Brave Iranian democracy protests stone basij and force them to flee:
On Saturday night, June 20th, the Basij (Islamic Militia) headquarters was set on fire (Video) while the Basijis barricaded themselves inside.
At least five were killed. 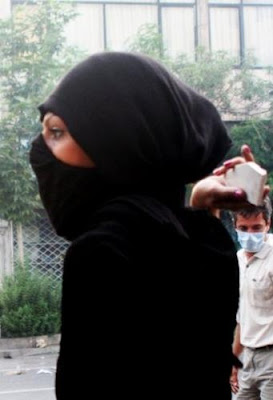 The regime in Iran arrested several members of former President Rafsanjani’s family on Sunday. The regime reported 10 deaths from the protests yesterday.
The AP reported:

An eerie calm settled over the streets of Tehran Sunday as state media reported at least 10 more deaths in post-election unrest and said authorities arrested the daughter and four other relatives of ex-President Hashemi Rafsanjani, one of Iran’s most powerful men…

The New-York based International Campaign for Human Rights in Iran said scores of injured demonstrators who had sought medical treatment after Saturday’s clashes were arrested by security forces at hospitals in the capital.

It said doctors had been ordered to report protest-related injuries to the authorities, and that some seriously injured protesters had sought refuge at foreign embassies in a bid to evade arrest.

“The arrest of citizens seeking care for wounds suffered at the hands of security forces when they attempted to exercise rights guaranteed under their own constitution and international law is deplorable,” said Hadi Ghaemi, spokesman for the campaign, denouncing the alleged arrests as “a sign of profound disrespect by the state for the well-being of its own people.”

“The government of Iran should be ashamed of itself. Right now, in front of the whole world, it is showing its violent actions,” he said. 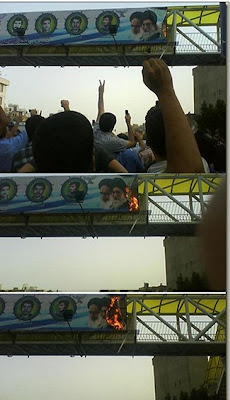 Bill Clinton responds to the crisis in Iran.
He sounds detached or drunk:

“What’s going on in Iran, really?” Clinton asked. “They have some ethnic differences there and some religious differences, but basically, this is about a government trying to deny the modern world.

“And the idea is they just don’t think they can keep control, if everybody gets to say what they really believe, and go where they really want, and be who they want to be,” Clinton said, adding with a chuckle: “And they’re right, right there.”

UPDATE: Republican strategist Karen Hanretty was on FOX News today and was horrrible– standing up for Barack Obama’s support by default for the Iranian regime.
Shame on you, Karen.
As Ed Morrissey says:

What kind of democratic leader deliberately chooses to ignore and then downplay a grassroots, democratic movement against tyrants in order to preserve some hope of negotiating with the tyrants for a less-hostile relationship with them? 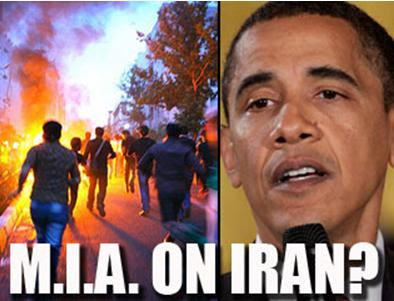 FOX News photo
Republicans say its time for Dear Leader to get off the sidelines.

DEALING WITH IRAN: Reader Paul Levitt is reminded of these words from John Howard:

If you imagine that you can buy immunity from fanatics by curling yourself in a ball, apologising for the world – to the world – for who you are and what you stand for and what you believe in, not only is that morally bankrupt, but it’s also ineffective. Because fanatics despise a lot of things and the things they despise most is weakness and timidity. There has been plenty of evidence through history that fanatics attack weakness and retreating people even more savagely than they do defiant people.