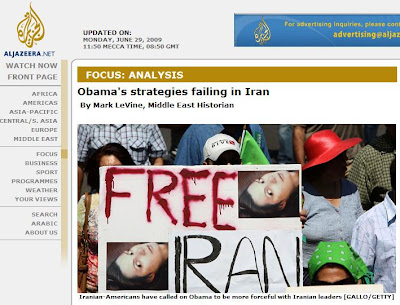 Maybe someday in the US we’ll be lucky enough to have a media that is not so compliant and complicit to the ruling class.

You know it’s bad when the Arabs start criticizing you for your response to intensified government repression.
Aljazeera reported:

It took two weeks of intensified government repression against protesters in Iran before Barack Obama, the US president, moved from cautious commentary to describing the crackdown as “violent and unjust”.

The acknowledged elephant in the room preventing a more robust US response to the Iranian crisis is the Anglo-American-organised coup in 1953, which overthrew Mohammed Mossadeqh, the nationalist prime minister, and brought the 33-year-old Shah, Mohammed Reza Pahlavi, back to the country as unchallenged ruler.

The coup was motivated by Mossadeqh’s and the Iranian parliament’s decision to nationalise the British-controlled Anglo-Iranian Oil Company in 1951, and by the fear that Soviet-inspired communists might take over the government.

The US-sponsored overthrow of Mossadeqh and our subsequent whole-hearted support for the Shah’s brutal rule are ignominious chapters in the history of US foreign policy.

But does a coup 55 years ago really disqualify the US from standing up forcefully for democracy in Iran today?

It is highly unlikely.

Mahmoud Ahmadinejad, the Iranian president, and Ayatollah Ali Khamenei, the supreme leader, do not fear the US but rather their own people’s desire to live in a country more like the US.

In fact, in poll after poll Iranians have revealed themselves to be among the most pro-American and pro-democratic people in the Muslim majority world.

This follows the report this weekend from the Far Left German news service Der Spiegel that pounded Obama for his disastrous economic policies.