Let them have rocks. 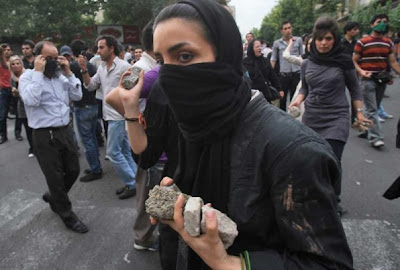 Weasel Zippers and National Review reported on this from Newsmax:

Newsmax has learned that the Obama administration also has zeroed out funding for pro-democracy programs inside Iran from the State Department budget for fiscal 2010, just as protests in Iran are ramping up.

Funding for pro-democracy programs began in 2004, when Congress earmarked $1.5 million of the State Department budget for “educational, humanitarian, and non-governmental organizations and individuals inside Iran to support the advancement of democracy and human rights in Iran.”

But no money has been earmarked for such programs in the administration’s fiscal 2010 foreign operations budget request. Congressional sources told Newsmax they doubted that a Democrat-controlled Congress would add it when the budget comes before a committee next week.

Controversy has surrounded the programs from the start, with pro-regime lobbying groups, such as the National Iranian-American Council urging the State Department to cancel the funding.

Note: It has been widely reported that the National Iranian-American Council (NIAC) and its founder Trita Parsi are Iranian regime sympathizers