What a bargain!
This guy sure is a whiz with (your) money!…
Isn’t he?

Team Obama made a deal with the island country of Palau to take the Uighur terrorists… For $12 million a pop.
And, these are supposed to be the “good” Gitmo terrorists(?) 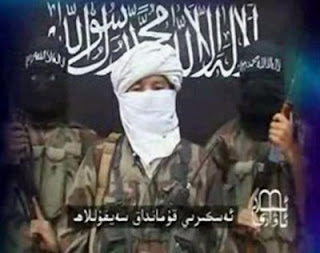 A Uighur terrorist in a recent internet threat. (Nice Deb)

Obama will pay $200 million to Palau to take some or all of the 17 Uighur terrorists held at Gitmo.
That’s $12 million per Uighur.
The Weekly Standard Blog reported:

It looks like the Obama administration has finally found a home for the 17 Uighurs detained at Gitmo. According to the Associated Press, the small Pacific Island of Palau is reportedly taking some or all of the 17 Uighurs in exchange for $200 million. If true, this raises a few obvious observations and questions.

Second, $200 million is a steep price. At that rate, the Obama administration is willing to pay almost $12 million per Uighur if Palau takes all 17 Uighurs.

Obama had wanted to release the Uighurs who trained in Tora Bora with Al-Qaeda for some time now.
The process really stepped up after they called Obama a communist last week.