Even after they shot democracy protesters dead… 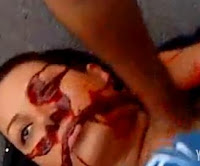 Regime thugs shot Neda Soltani dead at a rally in Tehran this month.
The regime later blamed it on the BBC.

The evil regime is slaughtering their citizens on the street.
But, Barack Obama still wants to hold talks with the killers.
Voice of America reported:

The ongoing post-election turmoil in Iran has raised questions about the outlook for diplomacy to deal with Tehran’s nuclear ambitions.

Appearing on the CBS television program Face the Nation, U.S. Ambassador to the United Nations Susan Rice indicated the Iranian nuclear program remains a matter of high concern for the White House.

“We have an interest in any case in trying to ensure that Iran does not achieve a nuclear weapons capability,” said Rice. “We have pursued that through multi-lateral diplomacy. We have left the door open to bilateral diplomacy.”