“Bowing To Saudi King Is Not An Energy Policy”

Newt Gingrich was the guest of honor at a fundraiser hosted by the Naitonal Republican Congressional and Senatorial committees.
Here is his energy tip for Barack Obama:

Bowing is not an energy plan…
Either is a policy that excludes oil, gas, coal, and nuclear energy development.

Team Obama insisted this was not a bow: 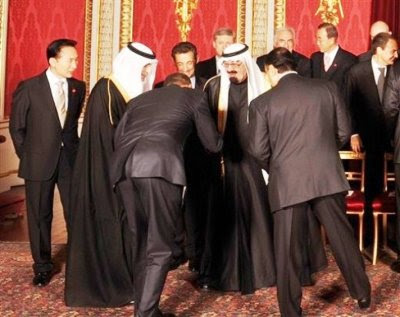 It was.
The president bowed to King Abdullah of Saudi Arabia at a G-20 meeting in London.

The bow didn’t help much.
US gas prices are up 60 cents a gallon since he bowed to Abdullah on April 2nd.

“Bureaucrats managing companies does not work, politicians dominating the economy does not work,” Bloomberg reported Gingrich as saying.

Standing in as the party’s de facto leader, Gingrich was filling a speaking role that Bush held in recent years and that was initially offered to Alaska Gov. Sarah Palin, the 2008 Republican nominee for vice president, this year. He headlined a series of speakers who gave the crowd a blistering review of Obama and Democratic leaders on Capitol Hill.