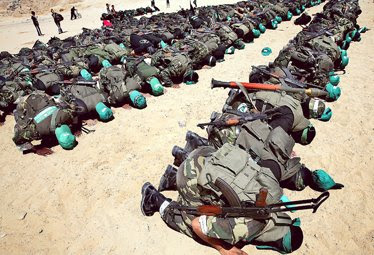 Good luck.
In his much anticipated speech, Benjamin Netanyahu called for a demilitarized Palestinian state that also recognizes Israel.
He also corrected Barack Obama on his nutty history of Israel.
The Jerusalem Post reported:

In a much-anticipated foreign policy address Sunday night Prime Minister Binyamin Netanyahu called for the establishment of a demilitarized Palestinian state alongside Israel, but only if the Palestinians recognize Israel’s nature as a Jewish state.

Netanyahu said that he embraced President Barack Obama’s vision, adding, however, that the Holocaust was not the reason for the establishment of the Jewish state.

The prime minister said that the descendants of the Palestinian refugees must not be resettled within Israel borders and that Jerusalem must remain united. Israel, he said, would not build any new settlements or expropriate new land for existing settlements.

“Peace has always been our objective,” Netanyahu began. “Our prophets always envisioned peace; we bless each other with Shalom; our prayers end in peace.”

Unfortunately, Israel’s peace partners do not feel the same way about peace.

Charles Krauthammer said this after Obama’s Cairo speech last week, ” He did more in 3 minutes to delegitimize Israel than any other president in history.”