Like clockwork… Today Good Morning America said Palin was “polarizing” for warning America of the destruction being wrought on the nation by Obama’s historic spending and power grab.

Funny, GMA didn’t think it was “polarizing” when Newsweek celebrated American socialism on the cover of its magazine: 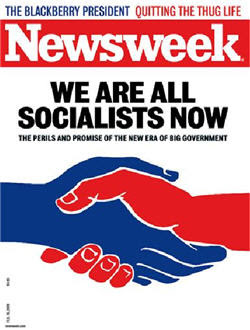 Socialism is cute when the Left talks about it.